The stock markets recovered the Budget-day losses in the first two sessions of the week, and continued to rise until trimming some of those gains only on Friday next.

Domestic stock markets rallied this week with benchmark indices clocking gains of nearly 4 per cent after the February 1 Budget announcements triggered their worst single-day fall in at least 17 months. The S&P BSE Sensex index registered a gain of 1,406.32 points (3.54 per cent) for the week while the broader NSE Nifty benchmark added 436.5 points (3.74 per cent). That marked the biggest weekly gain for the 30-scrip benchmark index since March 2019. Analysts say that the Budget may support the economy in the long term, even though it fell short of near-term market expectations.

"From a long-term perspective, the Budget has a lot of ingredients to drive economic growth. The dual stimulus (first the Budget, then the RBI policy) provided various measures to stimulate the broader economy which will bring results," said Jimeet Modi, founder and CEO, SAMCO Securities & StockNote.

Financial stocks were the biggest drags as the Sensex logged its worst single-day plunge (in percentage terms) since November 11, 2016, and the Nifty its worst since October 5, 2018. Mid-cap shares - which had outperformed larger peers in the run up to Budget - slid, with the Nifty Midcap 50 index diving more than 3 per cent to a three-week low.

The Budget failed to immediately excite investors who were mainly looking for a reduction or removal of taxes on long-term capital gains, as sustained weaker growth and tax cuts made gross revenue targets difficult to achieve at a time official estimates show the economy staring at the weakest pace of expansion since the 2008-09 global financial crisis.

Economists said the Budget appeared to support growth over the longer term but insufficient to provide an immediate boost to the ailing economy.

The stock markets recovered the Budget-day losses in the first two sessions of the week, and continued to rise until trimming some of those gains only on Friday next.

The Reserve Bank of India (RBI) held the repo rate - the key interest rate at which it lends short-term funds to commercial banks - steady at 5.15 per cent for a second straight time while maintaining an "accommodative" stance, meeting economists' estimates.

Hinting at further monetary policy easing going forward, the central bank emphasised on financial stability and announced several temporary measures in a bid to boost credit growth. It allowed banks to do away with the need to set aside extra cash reserves against incremental lending individuals and to micro, small and medium enterprises (MSMEs). 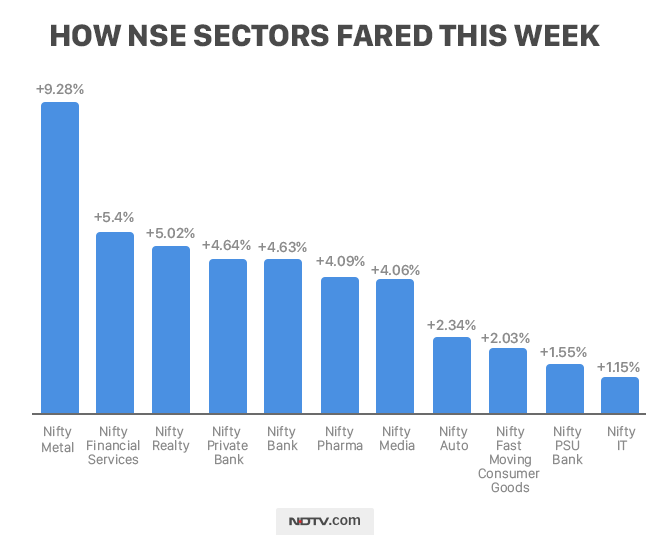 All of the 11 sectoral indices on the NSE and 19 on the BSE rose on a weekly basis, led by metal, financial services, telecom and realty stocks. The Nifty Metal and the S&P BSE Metal indices surged 9.28 per cent and 9.19 per cent respectively.

On the 50-scrip Nifty index, all but eight stocks moved higher during this period. Top percentage gainers in the Nifty 50 basket were steelmakers JSW Steel (+13.99%) and Tata Steel (+10.96%), oil company Bharat Petroleum (10.48%) and non-banking financial company Bajaj Finance (+8.76%). On the other hand, fast-moving consumer goods major ITC was the worst hit (-2.60%).

Here are the winners and losers of the week:

Some Correction Cannot Be Ruled Out In Near Term, Say Analysts

Official data on consumer inflation and industrial production, and auto sales data from industry body SIAM will be monitored closely for more insight on the health of the economy, say analysts.

“With Budget now behind and being a non-event, some correction can be expected in the markets in the short term before any rally,” AK Prabhakar, head of research at IDBI Capital, told NDTV.

Analysts expect some correction in the near term.

“The real impact on economic growth in the short term is likely to be real and valuations continue to be stretched. We could see markets give up some gains going forward,” said investment adviser Sandip Sabharwal.

On the global front, the prospect of the coronavirus outbreak threatening world economic growth may weigh on the domestic markets going forward, say some.

Many factories across China remained shut in an extended Lunar New Year holiday that was originally due to end on January 30 in a bid to contain the coronavirus outbreak that has killed more than 700 people.