The ceremony marks the commencement of the process of printing documents for the upcoming Interim Budget. 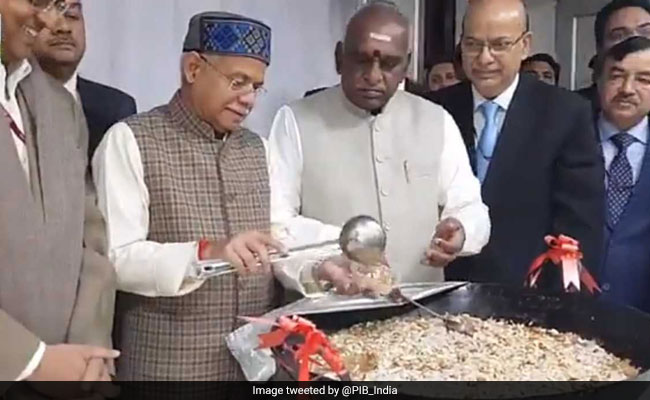 Budget 2019 halwa ceremony: Shiv Pratap Shukla and Pon Radhakrishnan were in attendance at the event

With a "halwa ceremony", finance ministry officials on Monday kicked off the printing process of Budget 2019 documents. The customary ceremony marks the beginning of the process of printing documents for the Budget. The event assumes significance as once the sweet dish is served, a large number of officials and support staff - who are directly associated with the Budget making and printing process - are required to stay in the ministry and remain cut off from their families till the presentation of the Budget in the Lok Sabha.

Halwa Ceremony was held today in North Block, New Delhi to mark the Ceremonial beginning of printing of #Budget2019 documents- Both the MoS (Finance) @bjpshivpshukla and @ponnaarrbjp jointly launched the Ceremony and shared the Halwa with the Ministry officials: pic.twitter.com/i47RBQYmbU

Here are five things to know about the halwa ceremony for budget 2019:

1. The government is due to present the interim budget in Parliament on February 1. That will mark the last budget before the general election due by May this year.

2. The government shared images of senior Union ministers Shiv Pratap Shukla and Pon Radhakrishnan, among other officials, congratulating each other while distributing the sweet dish.

4. The lock-in which follows the 'halwa ceremony' is observed to maintain the secrecy of the budget preparation process. Budget Press in North Block houses all these officials in the period leading up to the presentation of Union Budget in Parliament by the finance minister.

5. Only very senior officials in the Ministry of Finance are permitted to go home during this period.

Nominal GDP Growth For Next Fiscal Estimated At 10%: Nirmala Sitharaman