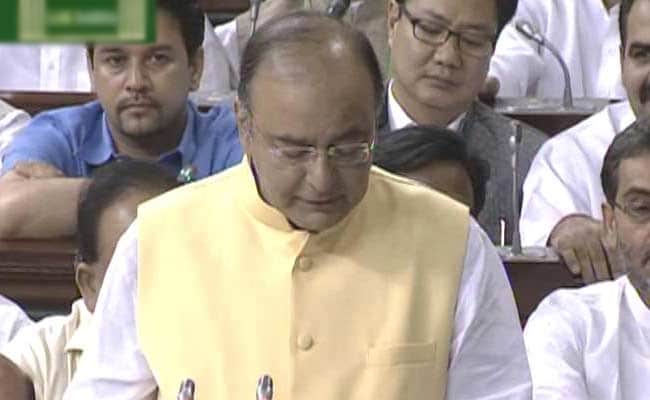 Finance Minister Arun Jaitley wasted no time on preambles or poetry as he presented his first Union Budget, stressing on fiscal prudence and making it clear that "we cannot spend beyond our means." (Budget 2014: Highlights)

To encourage savings, Mr Jaitley said as he reached his tax proposals, he announced some relief for individual tax payers, though he left tax rates and slabs unchanged. Mr Jaitley has raised the exemption limit by Rs 50,000 to Rs 2.5 lakh a year. This means that anyone who earns less than 2.5 lakh will not be taxed; those earning more than that will save Rs 5,150 a year. (Arun Jaitley Provides Big Relief to Income Tax Payers)

Earlier in his speech, the minister underscored the challenges the government faces to revive a rundown economy and said he had "no option but to take bold steps to spur growth." He said his government was bound to usher in policies for higher growth and to lower inflation. (Rs. 1000 Crore Set Aside to Improve Irrigation Facilities)

The only break in his brisk reading came when the Lok Sabha saw an unprecedented five-minute adjournment at his request as he reportedly had a severe backache. He resumed his speech sitting. (Finance Minister Arun Jaitley Takes Break During Budget Speech)

They plummeted when he indicated that the controversial retrospective tax was not being scrapped, but recovered some time later.  On most other counts Mr Jaitley seemed to meet market expectations. As of 1.15 p.m., the Sensex traded with over 300 points gain. (Sensex Up Over 400 Points)

He promised more clarity on the goods and services tax (GST) before the year end. The GST is seen as the single-biggest fiscal reform in the country - it aims to widen the tax base, improve tax compliance and reduce transaction costs of businesses. It can add as much as 2 per cent of GDP to India's economy, analysts say. (Finance Minister's 'Rs. 100-crore' Schemes Spark Buzz)

Mr Jaitley also made announcements on foreign direct investment in several sectors noting it would help manufacturing and employment. In bold steps, Mr Jaitley has proposed that FDI be raised from 26 per cent to 49 per cent in both defence and insurance. He announced FDI and an outlay of Rs 7000 crore for the Prime Minister's vision of 100 smart cities, saying that the new middle class needed new cities. (Modinomics Gives Big Boost to Defence Services)

Promoted
Listen to the latest songs, only on JioSaavn.com
He proposed setting up five more IITs, five more IIMs, allotting Rs 500 crore for this. He also resolved to ensure an AIIMS in every state soon, allocating Rs 500 crore more to set up four such hospitals for now.

Mr Jaitley also reiterated his government's commitment to providing 24x7 electricity in all homes and sanitation in all house by 2019 when India celebrates Mahatma Gandhi's 150th birth anniversary.