After 1% Weekly Fall In Sensex, Nifty, Analysts See Some Volatility Ahead

The Nifty Bank - comprising stocks of 12 major lenders in the country - fell 1.89% this week, after moving higher for eight weeks in a row.

Investors were taken aback by the RBI's surprise pause on the key lending rates, say analysts

Domestic stock markets ended the week around 1 per cent lower dragged by financial, auto and metal stocks. The S&P BSE Sensex index ended the week with a loss of 348.66 points, marking a decline of 0.85 per cent, whereas the broader NSE Nifty benchmark gave up 134.55 points (1.12 per cent). The 50-scrip index reversed the positive trend witnessed in past two weeks, a period in which it had added 160.6 points - or 1.35 per cent. According to analysts, some volatility can be expected going forward after recent correction.

"In a bull market, corrections are very violent so it is just a welcome correction," AK Prabhakar, head of research at IDBI Capital, told NDTV.

In the week ended December 6, Yes Bank, Eicher Motors, GAIL and IndusInd Bank were the top percentage laggards on the 50-scrip index, besides HCL Tech, whose shares traded ex-bonus on Thursday in the ratio of 1:1. HCL Tech ended the week at Rs 560, as against its close of Rs 1,127.65 the previous week.

Nine out of the 11 sectoral gauges on the National Stock Exchange (NSE) finished lower, led by the Nifty PSU Bank, Nifty Auto and Nifty Metal indices which declined 7.83 per cent, 3.46 per cent and 3.41 per cent respectively. 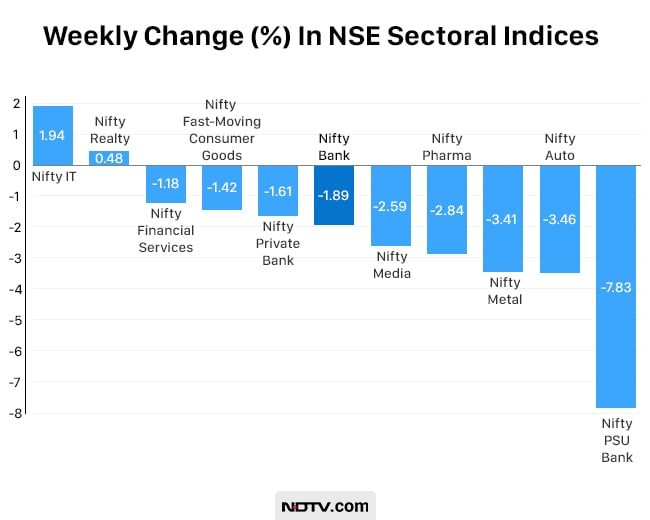 The Nifty Bank registered a loss of 1.89 per cent for the week, after moving higher for eight consecutive weeks. The Nifty Bank index - which comprises stocks of 12 major lenders in the country - had gained 4,214.25 points (15.20) in past eight weeks.

Investors were taken aback by the Reserve Bank of India's surprise pause on the key lending rates, say analysts.

In its fifth bi-monthly review, the Monetary Policy Committee decided to hold the repo rate at the existing nine-year low of 5.15 per cent against Street expectations of a 25-basis-point cut while maintaining an "accommodative" stance.

"The RBI action indicates that there is little room for monetary easing after full year of rate cuts. Going forward, the RBI has decided to wait and watch to see how the economy moves," said Jimeet Modi, CEO, SAMCO Securities.

In the coming week, macroeconomic data and global cues are expected to cause some volatility in the domestic markets. The government will release official data on inflation and industrial production on Thursday.

"One can expect banking sector to correct for 1-2 days. In a structural bull market the corrections are never big," said Mr Prabhakar, who expects the Nifty to clock a fresh all-time high around 12,500 by the end of the year.