Overall trend in the markets was negative, with only select stocks helping the benchmark indices rise on a weekly basis.

Domestic stock markets registered second straight weekly gain as strength in IT shares offset weakness in banking stocks. The S&P BSE Sensex index and the broader NSE Nifty benchmark climbed 115.89 points - or 0.28 per cent - and 15.1 points - or 0.12 per cent - for the week. In the previous week, the benchmark indices had soared 1,406.32 points (3.54 per cent) and 436.5 points (3.74 per cent) respectively, following Budget announcements which some analysts say may support the economy in the long run.

The overall trend in the markets was negative, with only select stocks helping the benchmark indices rise on a weekly basis. Only two of the eleven sectoral gauges on the National Stock Exchange (NSE) moved higher, led by the Nifty IT index which rose 1.05 per cent.

"Stock markets are in a zone of uncertainty after the strong bounce-back post-Budget and coronavirus concerns. Banks with significant exposure to the telecom sector might take a hit next week which will be cushioned by falling bond yields," investment advisor Sandip Sabharwal told NDTV.

On the other hand, the Nifty PSU Bank and Nifty Metal indices suffered losses of 4.41 per cent and 3.59 per cent respectively. The Nifty Bank - comprising shares in 12 of the country's major lenders - declined 1.18 per cent for the week. 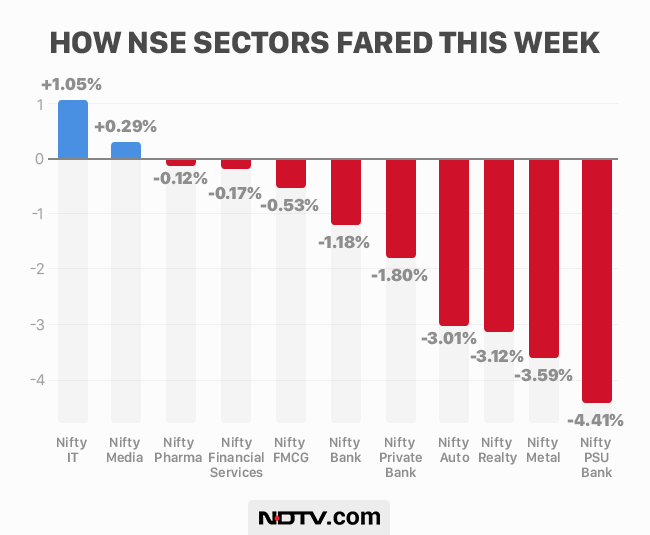 "Equity markets witnessed huge volatility during the week on account of fear about the coronavirus and the economic damage it can lead to,” said Siddhartha Khemka, head of retail research at Motilal Oswal Financial Services.

Going forward, analysts say that with earnings now behind, developments in the telecom sector - as the service providers move to clear their dues with the telecom department - and global cues in the backdrop of the coronavirus outbreak will set the tone for the domestic markets in the holiday-shortened week. The equity markets will remain closed on Friday, February 21, for Mahashivratri.

“The recent Supreme Court ruling on AGR (adjusted gross revenue) dues is a big jolt to Vodafone and Airtel. Only time will tell how they are able to repay the dues,” he added.

On Friday, the government ordered mobile carriers to immediately pay billions of dollars in dues after the Supreme Court threatened the companies and officials with contempt proceedings for failing to implement an earlier ruling.