Stock plans received Rs 1,310 crore ($184 million) in November, according to the Association of Mutual Funds in India.

Inflows into Indian equity funds shrunk to the lowest in more than three years last month after the record-hitting rally in stocks despite a faltering economy gave investors pause.

Stock plans received Rs 1,310 crore ($184 million) in November, according to the Association of Mutual Funds in India. That compares with Rs 6,020 crore received in October, and is the smallest since June 2016 when equity inflows fell to Rs 320 crore.

A gush of cash from global funds drove a record-breaking rally in the nation's main equity indexes last month as investors bet the worst of the economic slowdown may have passed. The gains, driven by a handful of large companies, continue to elude the broader market where retail investors typically focus. 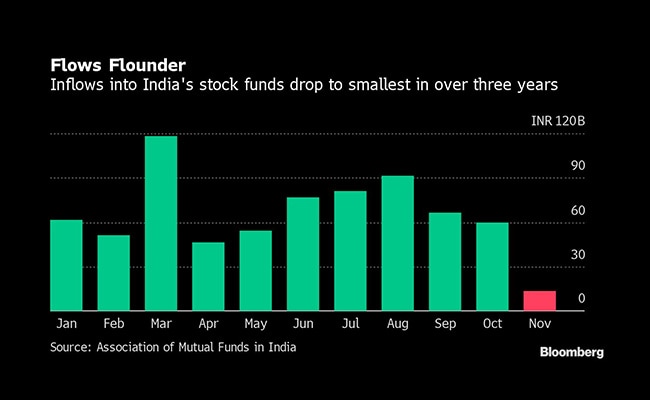 "Due to the narrow rally, funds haven't been able to generate returns seen in indexes," said Vidya Bala, head of research and co-founder at Chennai-based Primeinvestor.in. "Investors still haven't received the broad-based returns they ought to have got, which has slowed down fresh investments."

While global funds may be betting on the economy turning around -- surveys for manufacturing and services in November have both pointed to a rebound -- their optimism may not immediately rub off onto fund investors, said Ms Bala.

"As seen in previous market cycles, retail investors are seldom early to participate in the bottoming of the market," she said. "The mutual fund money comes in much later and is a gradual process."

"With markets touching new highs, some investors took money out," said NS Venkatesh, chief executive officer at the AMFI. "We think they are waiting at the sidelines to reassess the situation to re-enter at lower levels."