The yield on 10-year government debt has jumped about 27 basis points to 6.17 per cent since the government unveiled a Rs 35 trillion spending plan on February 1 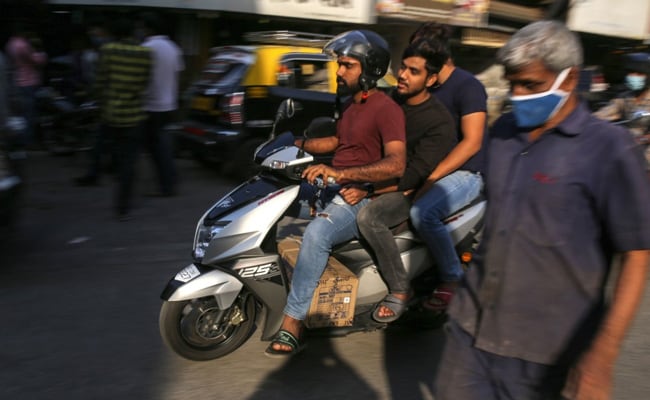 Bond traders are upsetting India's efforts to pull the economy out of its worst recession since 1952. The government wants to sell a near record Rs 12.1 trillion ($167 billion) of bonds in the next fiscal year to support its spending program. Such supply is putting pressure on yields to rise, along with a global selloff in bonds. Yet central bank officials are reluctant to let the 10-year yield increase because of its importance as a benchmark rate for borrowing.

The result is failed bond auctions, repeated interventions by the central bank and a growing sense of frustration by officials and bond investors alike. The central bank has said bond buyers should be sympathetic to government efforts to bolster the economy through keeping a lid on borrowing costs. As far as investors are concerned, the Reserve Bank of India needs to be much more transparent about its future bond purchases if it wants to restrain yields.

The central bank appears to be losing the argument. The yield on 10-year government debt has jumped about 27 basis points to 6.17 per cent since the government unveiled a Rs 35 trillion spending plan on February 1. That's above the 6 per cent level preferred by the monetary authority. 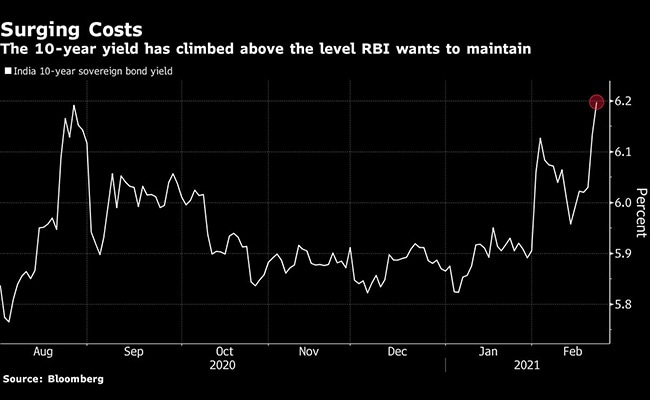 "It seems highly improbable for the RBI to succeed at defending the 6 per cent level" given rising global yields and limited monetary easing, said Abhishek Gupta, who covers India at Bloomberg Economics.

Instead of announcing a calendar for future bond purchases, the RBI unveiled measures to allow retail investors to buy sovereign debt and gave banks additional time to hold more bonds without marking to market. Another, rather optimistic, hope is that the nation's bonds will be included in global benchmarks, drawing in foreign funds.

The smooth running of the bond market, which provides the bulk of the budget-gap funding, is crucial to Prime Minister Narendra Modi's ambitious spending plans. Faced with opposition to one of his toughest reform measures as agricultural laborers protest new farming laws, PM Modi is hoping on a faster-than-expected revival of the economy, on the back of increased capital spending, to keep his popularity intact.

Data due Friday is expected to show India's economy staged a fragile recovery from the recession. Gross domestic product likely expanded 0.5 per cent in the fourth quarter from a year earlier, according to a Bloomberg survey of economists. Interest costs account for about 20 per cent of total expenses of the government.

The RBI has had success shepherding through the government's bond sales in the current fiscal year using a combination of open market operations, buying at the long end and selling short-term debt, and rejecting bids. That helped keep government borrowing costs at a record low weighted average cost of 5.78 per cent, according to the central bank.

But the RBI is now struggling to limit gains in yields as traders look for a clearer indication of the central bank's bond-purchase plans. While Bloomberg News reported this month that the monetary authority aims to buy more than Rs 3 trillion of sovereign bonds in the next year to March, the RBI has yet to detail its intentions publicly.

"Markets need to realize the importance of the huge borrowing program," said H.R. Khan, a former deputy governor at the Reserve Bank of India, who has handled the financial markets portfolio. "I don't see any harm in yield management for some more time."

The issue for traders is that such yield management isn't transparent. Surprise demand at a special auction on February 11 appeared to be by state-run banks and primary dealers buying the notes to sell on to the central bank. The RBI bought Rs 502 billion in the week through February 12 via open-market operations and discreet secondary market purchases.

"The clear signal from the bond market is that it needs a more substantial and predictable intervention program from the RBI," said Suyash Choudhary, head of fixed income at IDFC Asset Management Ltd. in Mumbai. "If this isn't heeded, then stability may be for optics alone, as the central bank manages yields at one or two benchmark points whereas the rest of the bond curve tells a different story altogether."

Other factors may force the central bank to shift its strategy. Rising inflation is driving up yields across the world. India is particularly exposed to higher commodity prices because the country imports more than 80 per cent of its crude oil needs.

Adding to the risk for bond investors is the threat of a credit rating downgrade. The nation's debt is rated a notch above junk by the three major global rating agencies, and two have a negative outlook.

This all makes holding down yields in the face of bond sales an almost impossible task without a change in tack.