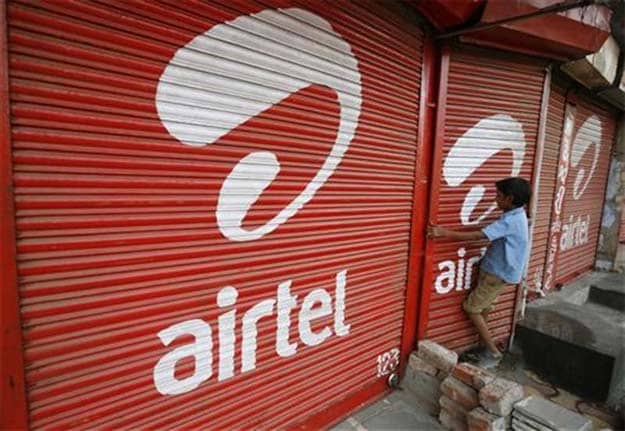 Shares in Bharti Airtel rose 2.3 per cent, heading for their fifth consecutive session of gains, as more brokerages upgraded the stock after last week's auction of 2G spectrum fetched lower prices than the government had targeted.

Credit Suisse upgraded Bharti Airtel to ‘outperform’ from ‘underweight’, and increased the target price to Rs. 335 from Rs. 225 on Monday. The risk reward for the Bharti stock seems favourable now, the global brokerage said.

EBITDA estimates are nearing the bottom and regulatory clarity in the sector is emerging, Credit Suisse said.

Bharti’s listing of its infratel arm could unlock shareholder value, Credit Suisse said, but warned that the entry of Mukesh Ambani-led Reliance Infotel into the voice business remains the biggest risk to India’s largest telecom service provider by subscribers.

On the telecom sector, the global bank said competitors may be less aggressive going forward as competitive pressure is falling and the regulatory impact is capped.

The investment banks add operators could also be testing markets for tariff hikes by reducing discounts.

"While the recent rally in stocks has been led by easing regulatory concerns, we believe the next leg will be driven by tariff increases," Credit Suisse said in a note dated on Monday.

Goldman Sachs upgraded the stock as well, to 'buy' from 'neutral', also citing reduced regulatory risk and potential for tariff hikes, according to a note dated Friday.

"We see room for potential tariff hikes in coming months as operators focus on reducing losses and pass the burden of higher spectrum on to consumers," Goldman wrote.

In late August this year, Credit Suisse downgraded Bharti to 'underperform' from 'neutral', and cut its target price to Rs 220, saying competition in the segment would increase with Reliance Infotel's entry into the wireless voice market.

The company reported a 5.4 per cent drop in sequential net profit for the second quarter ending September 2012. This is the 11th consecutive quarter of profit decline for Bharti as costs increased and intense competition pressured margins.

Bharti said net profit for the July to September quarter fell to Rs. 721 crore against Rs. 762 crore in the previous quarter. On an annual basis, consolidated net profit fell 29.8 per cent from Rs. 1,027 crore a year earlier.

UBS Securities’ Suresh Mahadevan said Bharti’s Q2 earnings were in line with expectations and that the company stood to gain most from the current environment in the telecom sector. The 2G auction flop is a big change for the sector as it means less competition and more price stability.

On November 16, Bank of America Merrill Lynch (BofA) upgraded Bharti and Idea to 'buy' from 'neutral' on the back of positive outcome of the 2G auction.

2) Policy decisions in areas like spectrum pricing could be favorable hereon (unlikely to get worse at least) leading to potentially lower cash outflow from operators, and

3) Strong FY14-15 earnings growth (+30-40 per cent) should help to ease valuations. Current EV/EBITDA multiples (nearly 6.5-times) are not cheap at 15 per cent premium to GEM (Global Emerging Markets) wireless average but may revert to 25-30 per cent premium as policy risks fade.

"In the medium term, two policy changes look likely: (1) reserve prices for the four not-bid circles could be lowered - Bharti is market leader in most of these circles; (2) benchmarking of future auctions (eg. 900MHz) to the recent one will likely be careful; this may lower re-farming outgo, though higher 1,800MHz availability makes re-farming likely," BofA-ML said in its note.