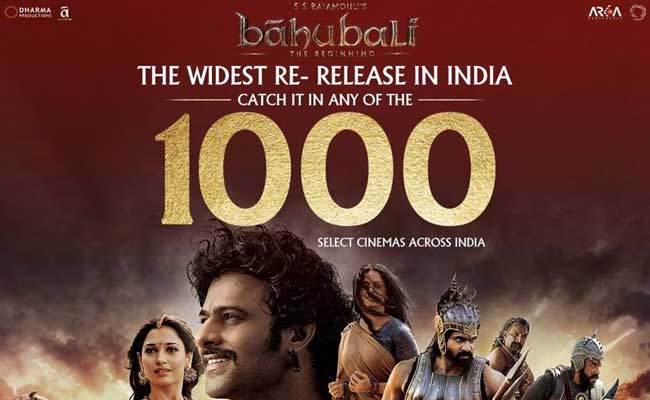 With the Hindi version of "Baahubali: The Beginning" re-releasing in over 1,000 screens today, shares of multiplex operators PVR and were Inox Leisure were in focus today. The re-release of "Baahubali" comes exactly two weeks before the release of the second part in the franchise on April 28. The Hindi version is being released by filmmaker Karan Johar's Dharma Productions. Produced by Arka entertainment, directed by SS Rajamouli, "Baahubali: The Beginning" stars Prabhas in the title role in addition to Rana Daggubati, Tamannaah Bhatia, Anushka Shetty, Ramya Krishnan and Sathyaraj in pivotal roles.

Shares of PVR were up over 3 per cent while Inox Leisure gained 0.30 per cent, outperforming the Sensex which was down nearly 0.20 per cent. Shares of both PVR and Inox Leisure have rallied over 30 per cent in the past three months, strongly outperforming the broader markets. Analysts expect the March quarter to be comparatively a good quarter for the multiplex operators on the back of strong box office performance of movies like  'Dangal' 'Raees', 'Kaabil', 'Jolly LLB2' and 'Badrinath Ki Dulhaniya'. The sentiment also remains upbeat due to 'Baahubali' re-release, say analysts.

Promoted
Listen to the latest songs, only on JioSaavn.com
March quarter is seasonally a weak quarter for multiplex operators, coinciding with examination time for children. "However, with the overflow of business of 'Dangal'   into January 2017 and good collections from 'Raees', 'Kaabil', 'Jolly LLB2' and 'Badrinath Ki Dulhaniya', we believe the occupancy rate in 4QFY17 (March quarter of FY17) will look better than in 4QFY16 (March quarter of FY16)," domestic brokerage Nirmal Bang said in a note.

"Also, on 'Dangal', the distributor's share will come off and the company should also benefit from this," the brokerage added.