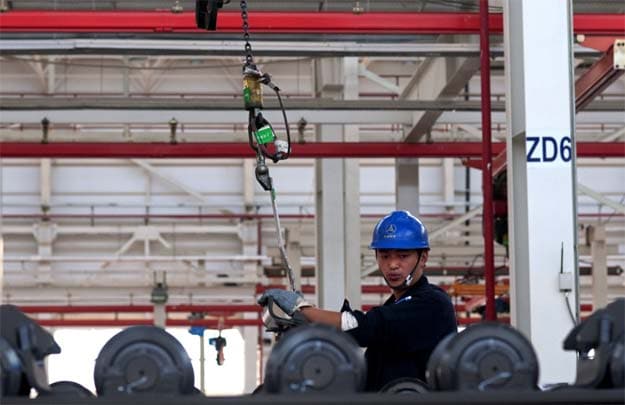 Big Asian economies are slowly picking up after a year spent battling against global headwinds, according to business surveys and data released on Thursday that showed renewed vim from China's factory sector and a rebound in South Korean exports.

A U.S. factory survey later - closely watched in Asia as a pointer towards export and production trends - is likely to show more evidence of a sluggish recovery with a second straight month of expansion in manufacturing.

India, hammered as much by internal politics as the global downturn, also showed signs of a modest revival in manufacturing in a survey released on Thursday.

Data over the past month has shown the health of the global economy remains fragile, with retail sales and the housing market pointing to an improvement in the United States while debt-hobbled Europe remains mired in crisis.

"Overall sentiment is brightening and Chinese orders are suggesting a moderate recovery," said Hirokazu Yuihama, a senior strategist at Daiwa Securities in Tokyo.

The Chinese economy, the motor of global growth in recent years, appears to have gathered pace in October after slowing to its weakest pace in more than three years in the third quarter.

China's official manufacturing purchasing managers' index (PMI) rose to 50.2 from 49.8 in September, just below a 50.3 forecast by a Reuters poll last week and suggesting an acceleration of output that will help lift fourth-quarter GDP growth above the 7.4 per cent annual rate recorded in the third quarter.

The U.S. Institute of Supply Management PMI, due at 1400 GMT, is forecast to come in at 51.2, slightly behind September's 51.5 but still above the 50-point line that divides accelerating from slowing activity.

Reports covering the major euro zone countries are due for release on Friday.

Beijing has been following a programme of pro-growth fine tuning of economic policies for a year and analysts broadly expect that to remain in place when a new leadership line-up at the top of the ruling Communist Party is unveiled this month.

"The return of the PMI above 50 suggests economic momentum has indeed picked up. It indicates the effect of policy easing may have been stronger than the consensus expected," Zhiwei Zhang of Nomura said in a comment emailed to Reuters.

"We believe macro data will continue to surprise on the upside in coming months, as the government continues to ease policy through the period of leadership transition."

Also on Thursday, the final reading of the Chinese HSBC PMI rose to 49.5 in October from 47.9 in September. The reading was the highest since February and deviated more than usual from the October flash, or preliminary, reading of 49.1 released last week.

The official PMI generally paints a rosier picture of the factory sector than the HSBC PMI as the official survey focuses on big, state-owned firms, while the HSBC survey targets smaller, private firms that have limited access to bank loans.

South Korea, another of Asia's manufacturing powerhouses, posted the first annual rise in exports in four months in October, adding to hopes for a turnaround after a year-long slump in global trade.

Stronger demand from China and Europe led the small but meaningful 1.2 per cent gain in exports last month on an annual basis, data from the Ministry of Knowledge Economy showed.

South Korea is home to some of the world's top suppliers of cars, ships and consumer electronics, and its October trade figures, the first from a major exporting economy, suggested global demand may be on the mend after a months-long slowdown.

A deputy economy minister said the recovering trend would continue for the remainder of the year, but analysts, while agreeing that the worst was over, said it would take a while longer before the global economy stages a firm rebound.

"The third quarter was the bottom for sure, but this 'bottom' will likely stretch out," said Park Hyung-jung, an economist at Meritz Securities in Seoul.

There was less encouragement from South Korea's Markit/HSBC PMI, which showed the country's manufacturing sector shrank in October for a fifth consecutive month, although at a slower pace than in September, as new export orders failed to break a months-long decline.

Trade-dependent Taiwan also saw a continued manufacturing contraction, although the headline October reading from its HSBC PMI was the highest in four months as a decline in new export orders slowed.

Monetary easing by the big developed world central banks has helped push up the currencies of countries such as Korea and Taiwan, hampering their export-led recoveries.

India's manufacturing growth inched up in October from September's 10-month low, supported by a pick up in new orders and an easing of price pressures.

The HSBC manufacturing PMI, which gauges the business activity of India's factories but not its utilities, nudged up to 52.9 in October from 52.8 in September.

While faltering demand from the West has hit Indian exports, the heaviest drag on an economy struggling against its weakest GDP growth in nearly three years has come from the government's struggle to rein in spending and a lack of reforms needed to spur investment.

"Economic activity in the manufacturing sector picked up slightly thanks to firm new orders," said Leif Eskesen, an economist at HSBC, sponsor of the survey. "Looking ahead, the recovery in manufacturing growth is likely to be low."