Just as it managed to put behind a public feud among its promoters, IndiGo is now grappling with employees leaving for better offers and slippages on its On-Time Performance (OTP). 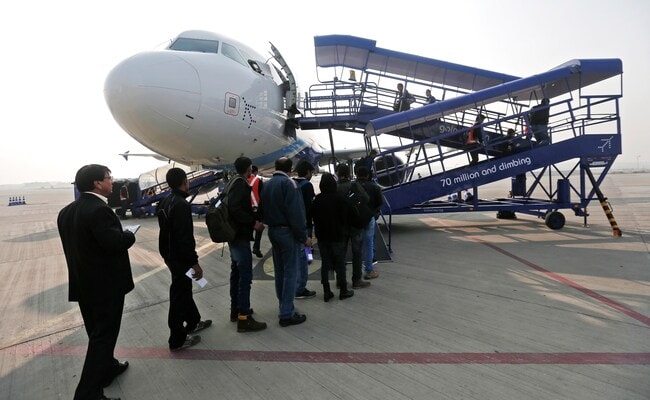 IndiGo had a domestic market share of 57.7 per cent in September.(File)

It is the country's largest airline and has been ruling the Indian skies for long. But as the aviation sector slowly claws back to normalcy after two years of pandemic-induced carnage, IndiGo is facing heat from competition which has been compounded by staff problems, changes in top management and a fleet diversification.

Just as it managed to put behind a public feud among its promoters, IndiGo is now grappling with employees leaving for better offers, slippages on its On-Time Performance (OTP) and a handful of technical snags denting its image, according to analysts.

In February 2020, before the pandemic, the airline had a market share of 48 per cent.

Just as the Indian skies opened up and air traffic began to rise, IndiGo saw a change in Chief Executive Officer (CEO) with Ronojoy Dutta stepping down ahead of his tenure which was to end in January 2024. Now, Pieter Elbers is at the helm as CEO.

While there has been no official word on attrition at the budget carrier, people in the know said many employees are quitting, especially with opportunities coming up as the global aviation space recovers after the pandemic.

With respect to Human Resources (HR) policies, an IndiGo spokesperson said the airline has established a strong culture of managing talent in support of expansion, growth, and succession planning.

"We have commenced rehiring for roles across corporate functions such as Digital, IT, Finance, HR, and Sales along with airport operations, customer service, and security functions. We have also restored the salaries of all our employees to pre-COVID levels," the spokesperson said.

In July, dissatisfaction among certain sections of the airline's employees came to the fore as a large number of staff called in sick, resulting in massive flight delays.

During the pandemic, the airline had slashed salaries of pilots by up to 30 per cent.

An employee said the carrier's revenue model and growth strategies are good, but there needs to be proper implementation of the policies in a more transparent manner.

Many people are leaving the airline, especially from the support teams, since there are better opportunities with the recovery in the aviation industry, the employee said on the condition of anonymity.

The airline's loss in the September quarter widened to Rs 1,583.34 crore on higher fuel costs and forex losses.

In the last three-four years, IndiGo was having prime slots and there was little competition. Also, the industry as a whole is facing issues with respect to OTP as more aircraft are flying and air traffic has increased. OTP is affecting every airline, but it becomes more visible when one player has very large operations, an aviation industry analyst pointed out.

IndiGo carried 59.72 lakh passengers out of the more than 1.03 crore people flown by domestic carriers in September, as per official data.

A second aviation industry analyst said that from being just a point-to-point carrier, IndiGo has become a network carrier, which has its own challenges like waiting for connecting passengers and baggage.

This had to be sometimes done across multiple terminals like in Delhi or Mumbai, further impacting the timelines, which are beyond the carrier's control. This also adversely hits the OTP, the analyst opined.

Now, with Air India set to consolidate its low-cost airlines -- Air India Express and AirAsia India -- into one entity, and Akasa Air also flying, the skies are getting more competitive for IndiGo. The re-launch of Jet Airways will add to the competition.

About competition, the airline spokesperson said India continues to develop as one of the world's largest civil aviation markets as it ramps up capabilities and capacity in infrastructure and services.

"Currently, IndiGo is operating 1600 flights a day, commands over half of the domestic market share, and has added 11 new domestic destinations to our network while working towards increasing our share of international operations.

"We will keep expanding our domestic and international network and will continue to enhance engagement with our passengers to augment their travel experience and offer them unparalleled services with maximum connectivity and On-Time Performance," the spokesperson said.

In recent times, there have also been incidents of misbehaviour involving IndiGo staff. In May, then IndiGo CEO Ronojoy Dutta expressed regret for an incident that happened at the Ranchi airport where a specially-abled child was barred from boarding his flight to Hyderabad as he was in "a state of panic".

In the wake of the pandemic, many staffers had to leave and now, there are concerns over job security which was not the case before the pandemic, claimed the employee who was quoted earlier.

There is also an overhang of the feud between IndiGo founders -- Rahul Bhatia and Rakesh Gangwal -- which was out in the public in 2019. On September 8, Rakesh Gangwal and his wife sold 2.74 per cent stake in the airline for Rs 2,005 crore.

In February 2022, Rakesh Gangwal resigned from the board of IndiGo's parent InterGlobe Aviation and also said that he would gradually reduce his shareholding over the next five years.

There have also been multiple changes in the top management.

A former IndiGo staff, who had served at a senior position, said the carrier had two strong pillars -- Rahul Bhatia and Rakesh Gangwal -- but when the tussle between them happened, the whole management set up at IndiGo was impacted and around the same time, the coronavirus pandemic happened.

Aviation consultancy CAPA India's chief Kapil Kaul said IndiGo has a very large and complex operation but he does not see anything alarming. "Though safety oversight and surveillance must be increased across the industry if safety issues are surfacing. We need an institutional response to safety." According to him, the engine-related issues have stabilised from the safety perspective and now they are facing the impact of supply chain disruption but otherwise there is order in place at IndiGo.

Among other incidents, recently, the engine of an IndiGo's Bengaluru-bound plane caught fire at the Delhi airport. Aviation regulator Directorate General of Civil Aviation (DGCA) is probing the incident.

Aviation industry veteran and analyst Captain Ranganathan said IndiGo has fairly safe operations but there seems to be the element of becoming bigger in size.

On the equities front, the company has been delivering substantial returns to investors. The scrip, which was listed on the bourses on November 10, 2015, has surged nearly 103 per cent on the BSE till October 31 this year.

However, so far this year, the performance has been muted. Shares of the company have slumped nearly 12 per cent till October 31, 2022 even as the benchmark BSE 30-share Sensex has climbed 4.27 per cent during the same period.

"We are on a steady path to recovery, benefiting from enormous opportunity both in domestic and international markets. With an industry challenged by global supply chain disruptions, we are working on various counter measures to accommodate this strong demand," CEO Pieter Elbers said at the quarterly earnings call on Friday.

IndiGo started its journey in August 2006 and during this more than 16 years-journey, quite a few airlines have also gone out of business, including Jet Airways and Kingfisher Airlines.