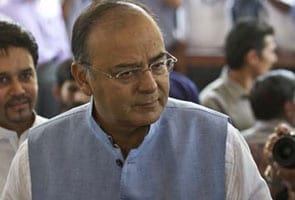 With many Indians worrying about the threat of tough measures in their new government's first budget next week, a Facebook post suggesting the Finance Minister might be pondering less earthly matters quickly roused anger on Wednesday.

Arun Jaitley, a key confidante of Prime Minister Narendra Modi, published a message celebrating "World UFO Day" on his Facebook page, which is one of the main forums in which he publishes official information.

"This day is celebrated to raise awareness about the existence of UFO's (sic) and with that intelligent beings from outer space," said the post, which was followed by Mr Jaitley's name and included a depiction of a flying saucer in a wheat field.

World UFO Day is a day dedicated to spotting and proving the existence of unidentified flying objects. It was first celebrated in 2001, according to the website worldofuday.com.

A member of Mr Jaitley's personal staff, who declined to be named, confirmed that their team had posted the message about World UFO Day and said the account had not been hacked. The post was deleted half an hour after Reuters contacted the team.

The post sparked a storm of criticism among his followers and was deleted after a few hours.

"Sir FM, today we the people of India are celebrating the price hike day instead of UFO day," a Facebook user said in a comment on Mr Jaitley's post, referring to India's recent moves to raise rail fares and fuel prices.

Mr Modi swept to power in May with a vow to revive India's economy after the longest spell of growth below 5 per cent in a quarter of a century, and he has since warned that the turnaround will involve some "bitter medicine".

On July 10, Mr Jaitley is expected to unveil a budget that will try to rein in a wide fiscal deficit partly by curbing the government's high subsidy bill in a country where 70 per cent of people live on less than $2 a day. He said on Tuesday that "bold steps" were needed to ensure fiscal discipline.

"Sir instead of talking on outer space, please confine your discussion on the hardship faced by common men," another user said in a comment.

"People are confused and scared about the undefined miseries which are going to heaped upon them in the names of restoring fiscal health of the country."

Promoted
Listen to the latest songs, only on JioSaavn.com
Investors have been impressed by Mr Jaitley's hawkish tone. The benchmark BSE index rose as much as 1.1 per cent to an all-time high of 25,810 on Wednesday, surpassing its previous record of 25,735.87 hit on June 11.