Apple's market capitalization is about equal to the combined values of the S&P 500's 200 smallest companies. 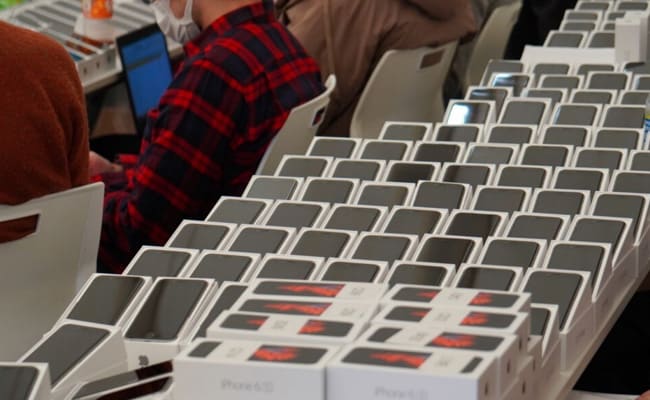 Apple shares quoted at $468.65 at the strongest level recorded on Wednesday

Just two years after Apple became the first publicly listed US company with a $1 trillion stock market value, the iPhone maker has now topped $2 trillion. The Cupertino, California-based company's shares briefly rose to as high as $468.65 on Wednesday, equivalent to a market capitalization of $2.004 trillion. The stock was last up 1.2 per cent at $467.62, giving Apple a market capitalization of $1.999 trillion.

Buoyed by bets on the long-term success of the country's biggest tech names in a post-coronavirus world, Apple's shares have surged since blowout quarterly results in July that saw the iPhone maker eclipse Saudi Aramco as the world's most valuable listed company. Apple's stock is up about 57 per cent so far in 2020.

The rally reflects growing investor confidence in Apple's shift toward relying less on sales of iPhones and more on services for its users, including video, music and games.

However, Apple's recent stock rally has left it potentially overvalued, according to a widely used metric. The stock is trading at over 30 times analysts' expected earnings, its highest level in more than a decade, according to Refinitiv.

Microsoft and Amazon follow Apple as the most valuable publicly traded US companies, each at about $1.6 trillion. They are followed by Google-owner Alphabet, at just over $1 trillion.

Those and other heavyweight technology companies have surged to record highs during the coronavirus pandemic as consumers rely more on e-commerce, video streaming and other services they provide. Investors are betting these companies will emerge from the pandemic stronger than smaller competitors, with some even viewing their volatile shares as safe havens.

Apple's revenue grew across every category and all of its geographical regions in the June quarter, even as the coronavirus crisis caused the US economy to contract at its worst rate since the Great Depression.

Apple surprised Wall Street as it was able to get loyal shoppers to buy iPhones, iPads and Macs online even as several brick-and-mortar stores remained closed due to the coronavirus lockdowns.

Started in the garage of co-founder Steve Jobs in 1976, Apple has pushed its revenue beyond the economic outputs of Portugal, Peru and other countries.

Current Chief Executive Officer Tim Cook took over from Jobs in 2011 and has more than doubled Apple's revenue and profits under his leadership.

The iPhone maker is slated to split its stock four-for-one when trading opens on August 31, with the company saying it aims to make its shares more accessible to individual investors.