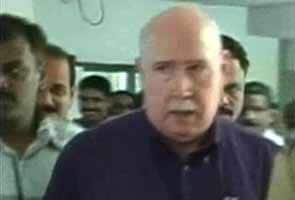 The Andhra Pradesh police today arrested Amway India chairman and CEO, William S Pinckney, in Gurgaon. He was presented before a Kurnool magistrate who remanded him to judicial custody till June 10, 2014.

A case has been registered against the CEO of Amway India and its franchisees under Section 420 of the Indian Penal Code and also Section 4, 5 and 6 of the Prize Chits and Money Circulation Schemes (Banning) Act.

The case was registered after a complaint was filed in August last year against the direct-selling firm, alleging unethical circulation of money through Amway's operations.

Kurnool Superintendent of Police Raghurami Reddy said they had been collecting a lot of documentary evidence leading up to the arrest. They took the help of the Gurgaon police to execute the arrest swiftly.

Amway expressed shock at what it called an 'unwarranted act of detention'. In a statement, the company said the allegations mentioned in the FIR are frivolous and gives a misleading impression about their business.

Amway said they are a law abiding corporate and has always cooperated in such investigations, and has been responsive to the queries and documentation.

The statement said there was lack of a legal framework for the direct selling industry, and so any case filed is being misinterpreted and booked under the Prize Chits and Money Circulation Schemes (Banning) Act 1978 (PCMCS), which is otherwise intended to regulate financial schemes.

Amway said the direct selling industry has been repeatedly seeking an amendment to the PCMCS Act and has been working along with various industry bodies and the government for the same.

This is the second time that the Amway India CEO has been taken into custody. A year ago Kerala Police arrested Pinckney and two company directors on charges of financial irregularities and cheating.

Mr Pinckney is an American holding an Australian passport. In case, he has an extended stay in jail, Mr Pinckney will be shifted to Kadapa Central jail. But with cases pending against him in Khammam, Warangal and Hyderabad, it's more likely that he will be on the move on transit remand, as each of these district police is likely to seek his custody.

The Andhra Pradesh CID, under IPS officer V.C.Sajjanar had filed a chargesheet against Amway in 2006. They went to Andhra Pradesh High Court but a division bench ruled that the business model is illegal. The company then filed a special leave petition in the Supreme Court in 2007 but the top court upheld the decision of the High Court. The state government also issued a government order (GO) in 2008, saying advertising products of Amway is illegal.

Promoted
Listen to the latest songs, only on JioSaavn.com
Then union minister of state for corporate affairs, Sachin Pilot, had subsequently commented that 'it is disappointing that such an eventuality came about. "We (Corporate Affairs Ministry) will work closely with concerned ministries and industries to remove the ambiguity in the law (related to tackling ponzi and other fraudulent schemes) as soon as possible," Pilot had said.