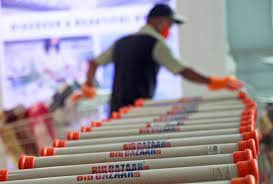 Shares of Future Group companies rose sharply on Monday after the National Company Law Tribunal (NCLT) rejected Amazon.com Inc's appeal against an antitrust suspension of its deal with Future Group, saying the US company concealed information when it sought approval in 2019.

That goes against the broader market plunge and the rupee's record low close as surging US inflation data and a COVID-19 warning from Beijing roiled global markets.

But the Future Group entities got a lift from the new verdict, which said Amazon hid crucial information and the Rs 200-crore fine was valid.

The NCLT - comprising of a two-member bench of Justice M Venugopal and Ashok Kumar Mishra, upheld the Competition Commission of India (CCI) findings and directed Amazon to pay the penalty of Rs 200 crore imposed by the fair trade regulator within 45 days from Monday.

But the risk of insolvency is high as the group continues to default on debt payments.

Bank of India had moved an Indian appeals tribunal (NCLT), filing a petition to initiate insolvency proceedings against debt-ridden Future Retail after the company defaulted on its payments to lenders because of the long-running legal feud with Amazon.