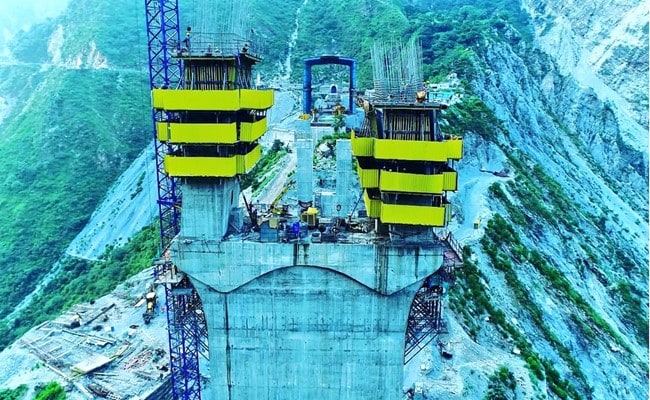 Indian Railways' Anji Khad Bridge: An engineering marvel, the country's very first cable-stayed Indian Railways bridge - the Anji Khad Bridge, will soon connect Katra and Reasi in Jammu and Kashmir. The cable-stayed railway bridge is a part of the challenging Udhampur-Srinagar-Baramulla Rail Link (USBRL) project. It is being developed by the Konkan Railway Corporation Limited (KRCL). Railway Minister Piyush Goyal had earlier said that the ambitious railway infrastructure project is being constructed with superior technological methods.

The Anji Khad Bridge stands at a height of 331 metres above the river bed. The total length of the bridge is 473.25 metres. It has been designed to handle heavy storms of strong winds due to the high altitude. The geology of the region is extremely complex, making it impossible for an arch bridge to be constructed. Due to this, the bridge has a single pylon. The pylon had to be constructed on a vertical slope by using micropiles of 40 metres in depth.

The Udhampur-Srinagar-Baramulla Rail Link project is the most difficult new railway line project undertaken on the Indian subcontinent. The terrain passes through the young Himalayas, which are situated across high altitudes. For execution purposes, the entire project has been divided into three sub-sections.

The construction activities are in progress on the Udhamur-Katra, Katra-Quazigund, and Quazigund-Srinagar-Baramulla sections of the project. The Katra-Qazigund leg is the most difficult stretch of this project. The alignment of this stretch which is almost 129 Km long, passes through the Patni and Pir Panjal ranges.

For the Anji Khad bridge, several unique techniques and equipment were used. Pump Concreting System arrangement was used to increase efficiency, giving a higher safety for workers and saved the construction time by about 30 per cent. The Anji Khad bridge will have access to an integrated monitoring system by means of various sensors installed at various locations on the bridge.