So Where Exactly Is Jack Ma? "Conflicting Schedules" Claim Is Made

The potential sale of as much as $8 billion in offshore debt was planned for as early as this week; however, a marketing memorandum hasn't yet been received by prospective investors 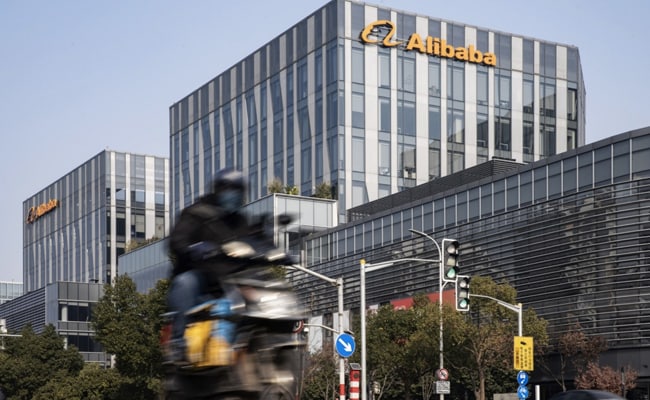 The Trump administration has taken several steps against Chinese companies, including banning apps

Investors are beginning to question whether Alibaba Group Holding can pull off a jumbo dollar bond in coming weeks given the uncertainty around co-founder Jack Ma and the Trump administration's crackdown on Chinese companies.

The potential sale of as much as $8 billion in offshore debt was planned for as early as this week; however, a marketing memorandum hasn't yet been received by prospective investors, according to people familiar with the matter, who asked not to be identified as they're not authorized to speak publicly. A spokesperson for Alibaba had no immediate comment on the progress of the sale.

That silence is leading investors to question whether the e-commerce giant will proceed with a sale at an increasingly challenging time. Reports of a potential U.S. investment ban this week also prompted spreads on some of Alibaba's dollar notes to hit their widest in six months, Bloomberg-compiled prices show. And with the leadership of President Elect Joe Biden days away, there's a good case to hold off until his China policy becomes clear.

"If I were the underwriter I would wait until the Biden Administration gets underway and perhaps take a more considered tone with China," said Geof Marshall, who runs the fixed-income team at CI Global Asset Management's Signature Global Asset Management, which has about C$30 billion ($24 billion) under management. 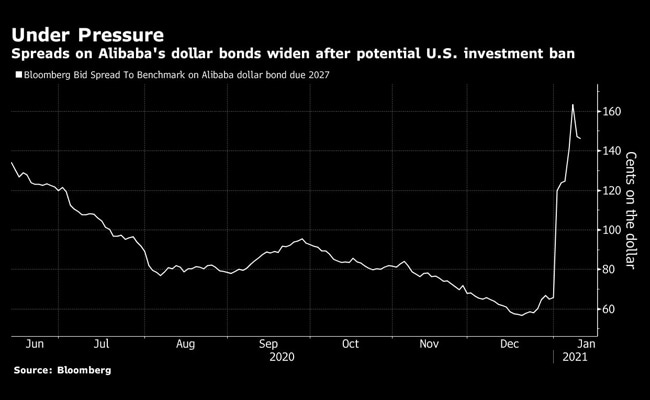 A debt sale of this magnitude would have been a show of strength for the company, signaling global investor confidence and reaffirming a key channel of funding for the firm. The global debt offering was set for at least $5 billion, but could have raised as much as $8 billion depending on the reception, Bloomberg reported previously. That would match Alibaba's record-setting debut in 2014, the largest offshore bond sale by a Chinese issuer.

Mr Ma hasn't been seen in public since his Internet empire was hit with a growing antitrust crackdown and the suspension of Ant Group's $35 billion IPO, while he castigated regulators for focusing too much on risk and stifling innovation. His absence from public view may deter potential investors already worried about the storm that has engulfed one of China's most powerful corporations.

"At the moment, it is not something we would participate in given the uncertainty around the actions of the Chinese regulator in this sector, Jack Ma's recent criticism of China's bureaucratic system and how the government will react to it," said Alejandro Arevalo, head of EM fixed-income at Jupiter Asset Management. "There are too many unknowns."

The planned IPO of Ant -- which would have been the biggest ever anywhere in the world -- had been scrapped and government regulators have dispatched investigators to his flagship e-commerce company.

Speculation of Mr Ma's whereabouts increased after the country's most high-profile billionaire missed a recent taping of his own television show, though Alibaba has attributed his absence to "conflicting schedules." That's led some to draw parallels with other fallen tycoons like Anbang Insurance Group's Wu Xiaohui and Tomorrow Group's Xiao Jianhua, whose disappearances preceded the breakup of their corporate empires.

Those concerns are overblown, according to one person with knowledge of the matter, explaining that Mr Ma decided himself to stay out of public view. The billionaire is cooperating with Beijing's investigations into Alibaba as well as a government directive to dampen online speculation over the probe, the person added.

Should Alibaba proceed with marketing the bonds, the company may still be able to generate "considerable demand," according to Bloomberg Intelligence analysts Robert Schiffman and Suborna Panja, adding that Alibaba's credit profile has "never been stronger."

"There is a price for everything. It will have to be juicy but Alibaba is here to stay," said Georges Gedeon, chief investment officer at credit fund Antler Capital Partners in London. "China will never destroy its tech champion."