A Top US Recession Indicator Hits Levels Last Seen In 2007, Before Financial Crisis

The US economy may be heading into a recession, according to an accepted indicator, after inflation there surged to a more-than-expected 40-year peak. 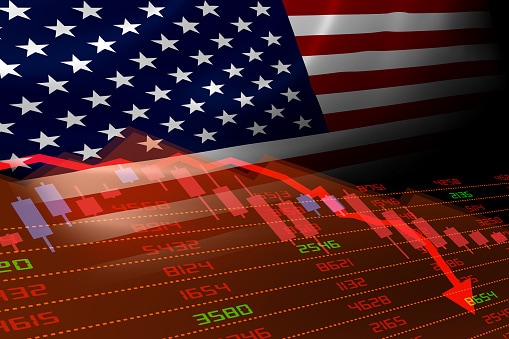 The US economy may be heading into a recession, according to a commonly accepted indicator, after inflation there surged to a more-than-expected 40-year peak, increasing bets for a 100 basis points rate hike by the Federal Reserve later this month.

Data showed the rising cost of energy, food and housing drove the US consumer price index to 9.1 per cent from a year ago in June, compared to just over 8 per cent predicted.

Surging inflation led to worries that the Federal Open Market Committee (FOMC) could hike rates by a huge 100 basis points rather than the already significant 75 basis points predicted previously.

"Stubbornly high inflation increases the risk that the FOMC continues to hike aggressively and triggers a recession," she said. "We expect that recession fears will continue to support the dollar."

Indeed, Bloomberg reported that swap markets showed traders were now pricing in a significant possibility that the Fed will dole out a 100-basis-point hike in July in the wake of hotter-than-anticipated inflation data.

"The concerning aspect in the CPI numbers was the breadth of increases," Shane Oliver, chief economist at AMP, told Reuters, and he said nearly 90 per cent of the US CPI components saw increases of more than 3 per cent.

Market pricing on the Chicago Mercantile Exchange's (CME) Fed watch tool indicated a 78 per cent chance of a 100 basis increase. However, Mr Oliver said this could only be a kneejerk reaction to the high inflation reading.

"I think the Fed will stick to 75 - which is still a high number - if they go to 100, it will look like they are panicking. Only time will tell, though; the Fed does have an unconditional commitment to get inflation back down,' he added.

But Treasury yields rose across the curve, although more at the short end and the dollar jumped too, sending the euro below parity with the greenback for the first time in two decades.

A decline in yields on longer-term debt below yields on the short-term debt of the same credit quality is referred to as an inverted yield curve. The inverted curve, also known as a negative yield curve, has previously proven to be a relatively reliable lead predictor of a recession.

The so-called yield curve inversion, when short-dated interest rates are higher than longer ones, is commonly seen as an indicator of a recession, and the gap between the two touched 25 basis points in early Asia, which is the difference between 75 basis points and a 100 basis points Fed rate hike.

One of the US bond market's most widely watched indicators of potential recession risk has reached levels last seen in 2007; Bloomberg reported and added that the Treasury curve inversion level was last seen in 2007, just before the global financial crisis.

Carlos Casanova, a senior economist at UBP, told Reuters that a recession in the US would mean less demand for Asian exports, with investors turning more "risk off" and moving money out of emerging markets, and forcing Asian central banks to raise rates themselves to avoid too currency depreciation.

That also is bad news for global economies and financial markets, especially stocks and currencies on the exchange rate's other side against the dollar.