Foreign investors seem bullish on these five stocks where they substantially increased exposure.

Foreign investors increased their stake in IRB Infra by 34.9% during the October-December 2021 quarter.

After persistent selling by foreign institutional investors (FIIs) in October and November 2021, they seem to be coming back to Indian markets.

As of January 13, FIIs were net buyers of Indian securities worth $479 million, including equities worth $434 million.

Prior to this, India was among the two countries that saw net FPI outflows for three consecutive months ending December 2021.

As there was US Fed's tapering measures and volatile global environment, FIIs were forced to claw back from emerging markets such as India.

That's because high interest rates in the US drove FIIs away and also because India had outperformed major global market indices.

Research Analyst at Equitymaster, Aditya Vora, had this to say when we asked him about the situation of FIIs back in November.

The FII selling is evident in pockets where valuations have run up beyond fundamentals.

Case in point being Jubilant FoodWorks, TCS, Divi's Labs, Britannia Industries. It is evident that FIIs have been selling in such names.

So what lies ahead? Are FIIs here to stay this time?

Let's take a look at top five Indian stocks where FIIs increased their stake sequentially. Please note, the data is as on 31 December 2021.

We have taken into consideration stocks from the BSE 500 index.

Foreign investors increased their stake in IRB Infra substantially by 34.9% during the October-December 2021 quarter.

In the September 2021 quarter, FIIs stake in IRB Infra was at 13.3% which increased to 48.2% in December 2021 quarter. With this, IRB Infra finally became a stock bought by foreign investors after three successive quarters of selling.

Apart from GIC, Cintra, an arm of Spanish infrastructure heavyweight Ferrovial, also invested in the company.

Both GIC and Cintra made this transaction among the largest equity fund raising by a listed infrastructure company, which will help IRB deleverage its balance sheet and have access to a growth capital to participate in new projects and the government's ambitious asset monetisation plan.

From the proceeds, IRB would use Rs 32.5 bn to repay corporate debt, Rs 15 bn as growth capital and Rs 6 bn for general corporate purposes.

Recently in an interview, the company's chairman and MD VD Mhaiskar said they expect margins to remain strong going ahead. He also said that toll collections have been showing good traction.

Even after 250% gains in the past one year, FIIs seem to be bullish on this commodity chemical stock. FIIs have pumped in big bucks in Deepak Fertilisers in the most recent December 2021 quarter.

This was on account of the QIP that was launched by the company. During the quarter, Deepak Fertilisers raised Rs 5.1 bn through a qualified institutional placement (QIP) of equity shares.

Majority of the portion, about 82%, was subscribed by foreign portfolio investors.

This was the company's first external equity fund raising since its first public issue in 1982.

So why are FIIs bullish on the stock?

Well, the company is leveraging on the growing mining needs by setting up a global scale technical ammonium nitrate project.

This news was revealed a month ago when Smartchem Technologies, a fully-owned subsidiary of Deepak Fertilisers, said that Odisha's Chief Minister Naveen Patnaik had laid the foundation stone for a Rs 22 bn technical ammonium nitrate complex.

Deepak Fertilisers is among India's leading producers of fertilisers and industrial chemicals since 1979 when it was set up as an ammonia manufacturer. It has since become a multi-product company.

FIIs must have also noted the company's financial performance in the September 2021 quarter where it reported a 16% rise in net profit, primarily driven by higher income.

Over the year gone by, shares of the company have gained 250%. 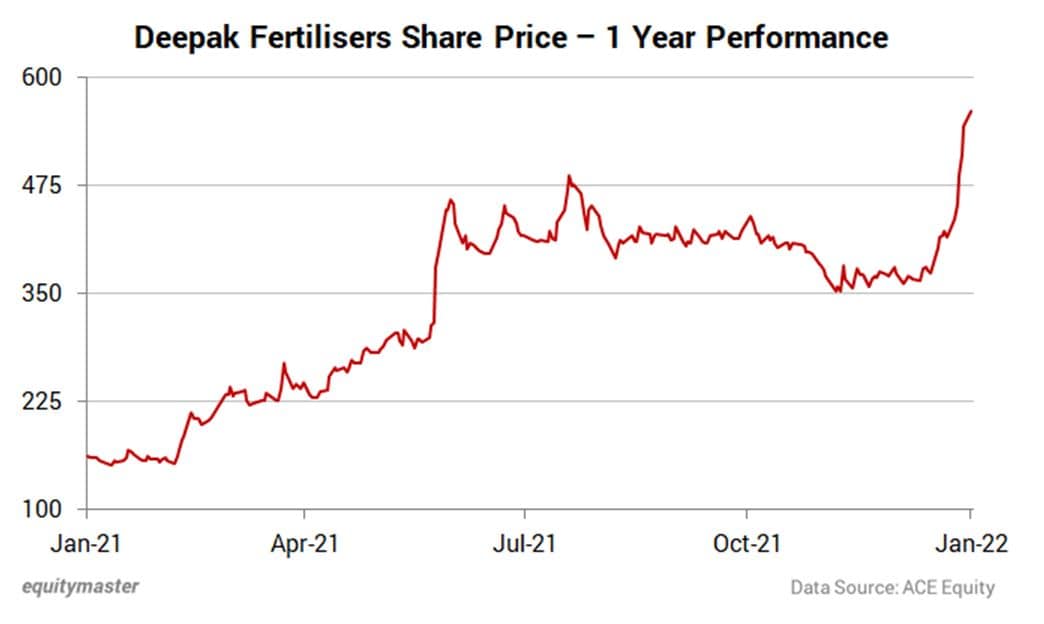 All eyes will be on the company when it declared results on 28 January 2022.

A portion of the raised funds were used towards reducing debt levels, while the surplus will be used to meet incremental working capital and capacity expansion requirements.

Shares of the company have seen traction recently after it was announced that Gokaldas plans to augment its production capacity and also explore
opportunities in the new line of business.

Trading at Rs 30 back in May 2020, shares of Gokaldas Exports have seen a sharp uptick and are presently hovering near all-time high. 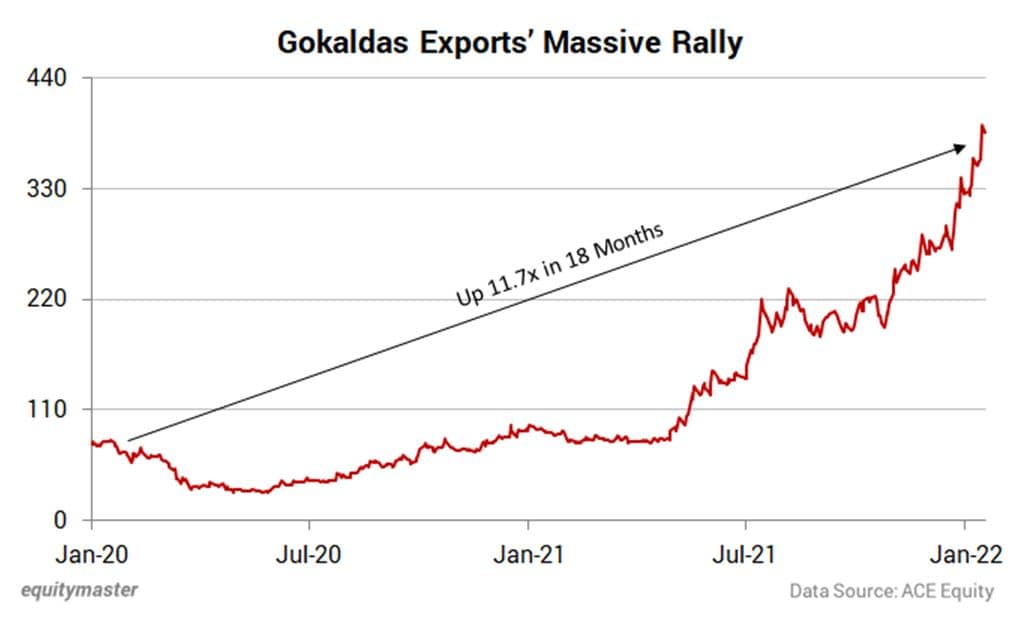 This is because Gokaldas has reported strong financials and a strong order book. It also has an established market position and good relationships with large international customers.

For the first half (April-September) of the current financial year 2021-22, the company had reported 6-fold jump in profits.

In an interview, the company's MD said Gokaldas will generate incremental revenue from Rs 3.4 bn of capacity expansion.

Here's him in his own words,

Several factories are in progress, which will deliver growth for us in next 3-5 years. Rs 340 crore odd, which we will be investing, would yield at least 4x of revenue. So Rs 1,400 crore of incremental revenue will be coming from this capex.

It remains to be seen how good the company's results are when it declares numbers on 21 January.

FIIs have been bullish on the stock of Saregama for quite some time now. This is evident as they have increased exposure to the stock for the past four quarters.

FIIs held just 4.4% stake in Saregama back in December 2020. The exposure now stands at a whopping 16.55%. The majority of the increase happened in the most recent quarter.

Saregama is more than 120-year-old company, which initially started as a music label company in 1902. Today, the company's portfolio includes intellectual property rights of over 4,000 hours of TV content produced for channels in languages including Hindi, Tamil, Telugu, Kannada, Malayalam, and Bengali.

Over the last few decades, the company has forayed into retailing music through physical and digital mediums. It has the largest library of sound recording and publishing copyrights of Indian music across 14 different languages.

As internet data prices are low and there's an increase in usage of smartphones, Saregama wants to capitalise on this trend.

Over the year gone by, shares of the company are up a whopping 540%! 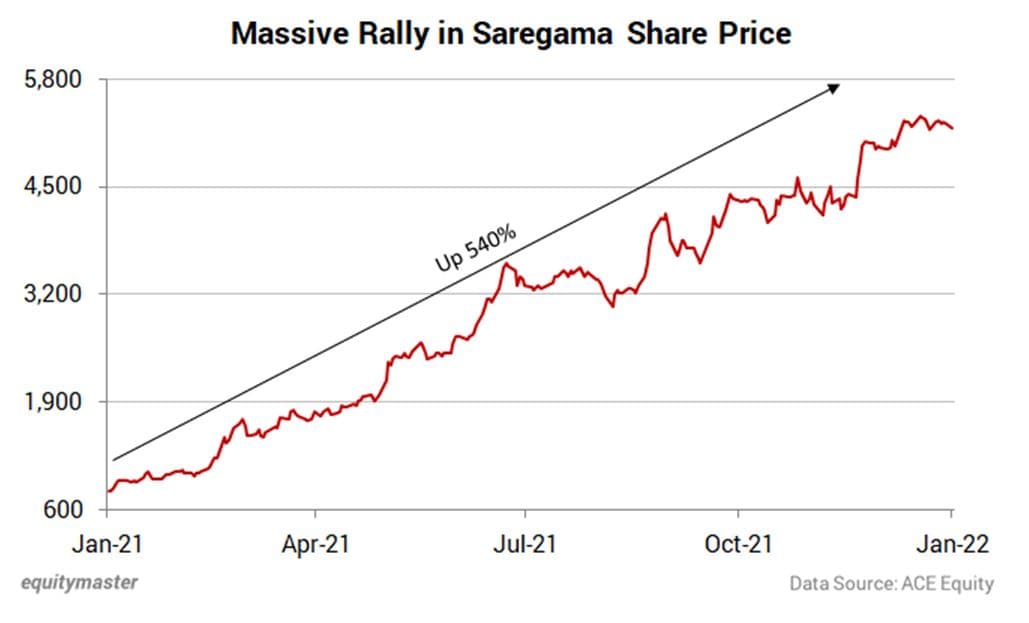 Back in mid-November 2021, Macrotech Developers raised Rs 40 bn from foreign and domestic institutional investors through the largest-ever QIP by a real estate developer in India.

This led to the company's FII holding increasing in the December 2021 quarter to 15.3%. In the previous quarter FIIs held 8.7% stake.

While these were already existing shareholders, there were new names as well including GIC, Oppenheimer, Universities Superannuation Scheme (USS), and Amundi.

As we're seeing the realty boom play out, foreign investors have turned bullish on big players like Lodha, which are set to take away market share from smaller players.

Structural factors are also in place for significant growth in volumes in housing, especially in the middle income and affordable segments. This is a focus area for Macrotech Developers.

These reasons were more than enough to get the anchor book oversubscribed by more than 3 times and witnessed traction from a diversified set of investors.

Interestingly, when the company came out with its IPO in April last year, the demand was weak among domestic investors. But foreign institutional investors stayed bullish and lapped up shares, accounting for over 87% of all institutional demand.

Following a weak listing, shares of the company are now up over 170%. 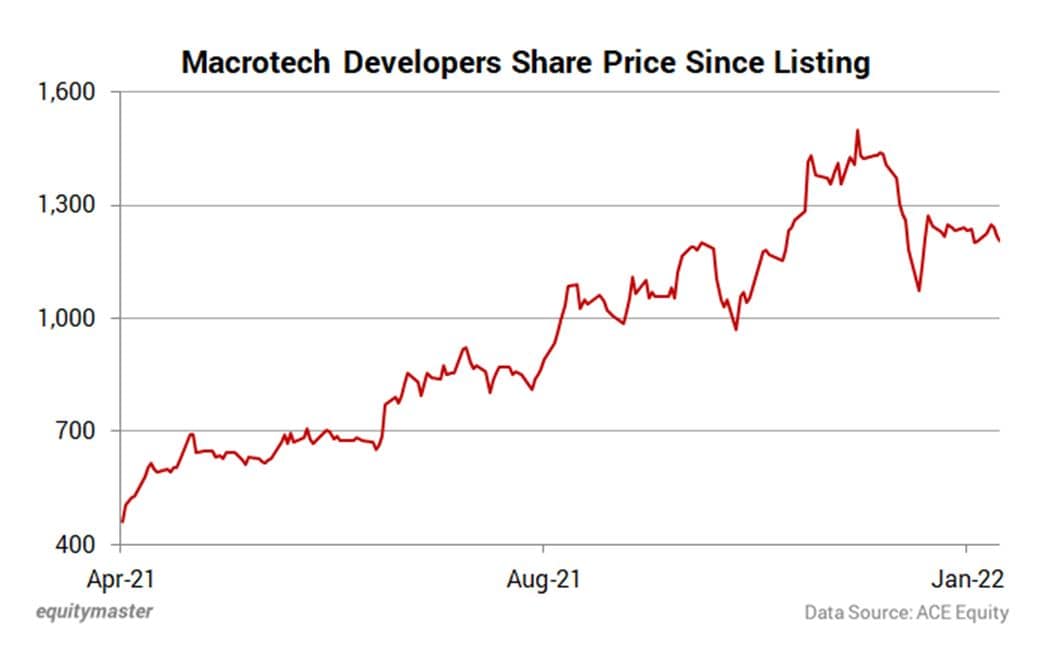 After receiving support from foreign investors, Macrotech Developer is now on course to achieve its dual target of deleveraging and capital-light expansion through joint development model.

In which other stocks did FIIs increase stake?

Apart from the above, here are a few stocks where FIIs increased their stake in the most recent December 2021 quarter.

This tool keeps track of what foreign investors are buying and selling.

Take a look at the screen below which shows the above companies on crucial parameters.

For quite some time now, FIIs have taken charge of Indian share markets to some extent. Any sudden increase or decrease from FIIs have sent stocks on a ride.

But this time it's different. 2021 showed us how India's dependence on FIIs has reduced. The participation of retail as well as domestic institutions is now significant.

Even if FIIs remain bearish, the India growth story would remain intact.

When FIIs were selling in November, domestic institutional investors were right around the corner supporting the market to some extent by buying.

However, given that FII involvement has been high and they did influence the Indian stock market to some extent, there can be volatility in stocks with high FII exposure.

That does not mean you should stay away from stocks wherein FII holding may be huge. It's just that this factor needs to be taken into consideration.

Fitch Says, M&As At The Forefront After HDFC Merger Proposal