As a commodity, cement ranks second in volume among all the world's top industrial items.

The Indian cement sector has grown substantially over the previous two decades. It has gone through all the stages of typical cyclical growth.

A cyclical business is one whose destiny is linked to the fate of the economy. The Cement Industry is highly cyclical in nature and depends on economic growth of the country.

As a commodity, cement ranks second in volume among all the world's top industrial items.

No wonder the value proposition of the cement industry is much bigger for a rising and transitional economy like India.

India is the second largest cement producer in the world and accounts for over 7% of the global installed capacity, second only to China.

The significant push by the government to the infrastructure sector in the Union Budget 2022 is also likely to boost cement demand. In the budget, an investment of Rs 7.5 tn has been set out for capital expenditure (capex).

The increase in the capex over the previous year, is likely to drive infrastructure spending that accounts for around one-fourth of the cement demand.

With the help of Equitymaster's powerful stock screener, we have shortlisted the top cement stocks which are set to benefit greatly from the government's infrastructure boom.

These are the stocks which came up when we ran the screener for best cement stocks in India.

HIL Limited (HIL) is a part of the C.K. Birla Group and is headquartered in Hyderabad. It's one of the leading companies in the building materials and construction industry.

It is engaged in the production and distribution of building products, thermal insulation products (refractories), and the generation of wind power.

The company has a network of 2,500 distributors and its dealership network consists of 6,000 sub-dealers which is supported by 40 depots and 3 sales offices across the country. Due to its acquisition of Parador of Germany, the company has a presence in 80+ countries.

For the December 2022 quarter, its net profit declined 35% to Rs 341.5 m against Rs 530 m reported in the same period a year ago. The company's quarterly profits were impacted on the back of inflated prices of raw materials due to supply chain disruptions.

However, HIL's focus on cost-cutting, along with price hikes, helped it mitigate the damage.

Over a period of 3 years, the company has delivered good sales and profit growth of 35% and 47.4% compounded annual growth rate (CAGR), respectively.

On the other hand, the stock has only returned 32% only to its shareholders in the last one year. 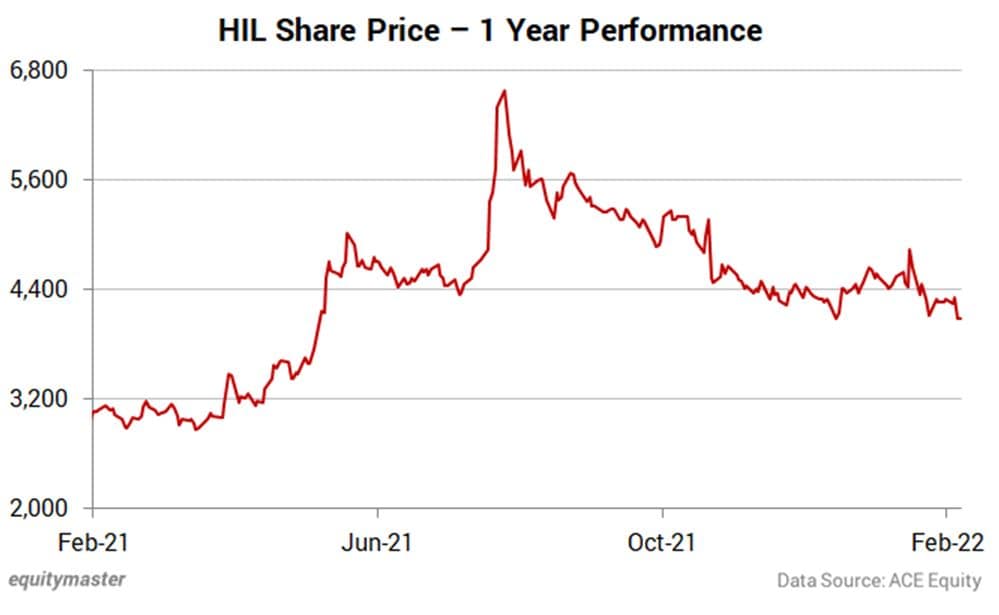 UltraTech Cement is the cement flagship company of the Aditya Birla Group.

A US$ 5.9 bn building solutions powerhouse, UltraTech is the largest manufacturer of grey cement, ready mix concrete (RMC) and white cement in India.

UltraTech is the third largest cement producer in the world, excluding China. UltraTech is the only cement company globally (outside of China) to have 100+ MTPA of cement manufacturing capacity in a single country.

In addition to grey cement, white cement, and RMC, UltraTech has a slew of specialty concretes that meet specific needs of customers.

UltraTech Cement, is a founding member of the Global Cement and Concrete Association (GCCA) and has committed to the ‘2050 Climate Ambition'. It will drive down its CO2 footprint in its aim to produce carbon neutral concrete by 2050.

The Aditya Birla group company reported a consolidated net profit of Rs 17.1 bn for the December 2022 quarter, an increase of 8% from a year ago. It was Rs 15.8 bn in the same period last year.

UltraTech's board approved capex of Rs 9.7 bn towards modernisation and expansion of capacity at Birla White from the current 6.5 lakh tons per annum (LTPA) to 12.53 LTPA, in a phased manner.

The capacity expansion will help Birla White strengthen its presence in the growing white cement market, reducing its dependence on high-cost imports.

UltraTech has also commenced operations from its bulk terminal at Kalamboli, Navi Mumbai, during the quarter. This is the seventh bulk terminal of the company.

The firm has an excellent dividend track record, having declared dividends on a steady basis over the previous 17-18 years.

Over a period of one year, shares of UltraTech Cement have delivered 14% returns to its investors. 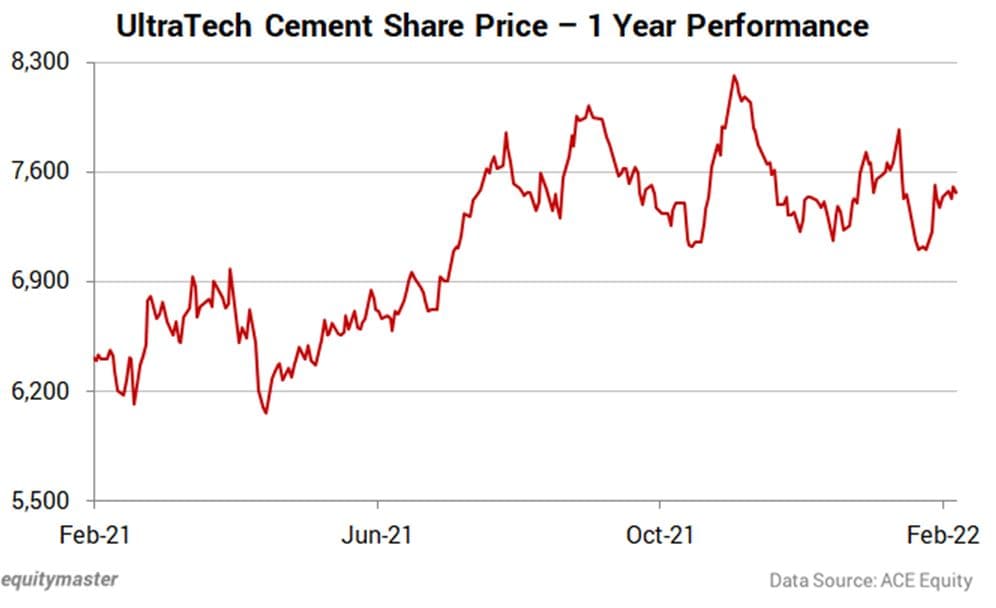 Shree Cement is engaged in the manufacturing and selling of cement and related products. It's one of the lowest cost producers of cement in the country.

The company's manufacturing operations are spread over North and East India. It's the 3rd largest cement producer in India with an installed capacity of 43.4 MTPA.

It also operates a separate trading division catering to third party buyers and sellers. It produces synthetic gypsum to replace the use of natural gypsum in cement manufacturing.

Apart from that, the company plans to increase its capacity at 12% CAGR to 80 m tons by the financial year 2026. It will profit from further capacity growth and strong demand from north and east India.

Shree Cement reported a decline of 23.6% in its consolidated net profit at Rs 4.8 bn for the third quarter ended 31 December 2021. This was because of higher power and fuel expenses.

Meanwhile, Shree Cements said its board declared an interim dividend of Rs 45 per equity share of Rs 10 each for the financial year 2021-22.

Currently, share price of the company is trading 22.6% below its 52-week high. 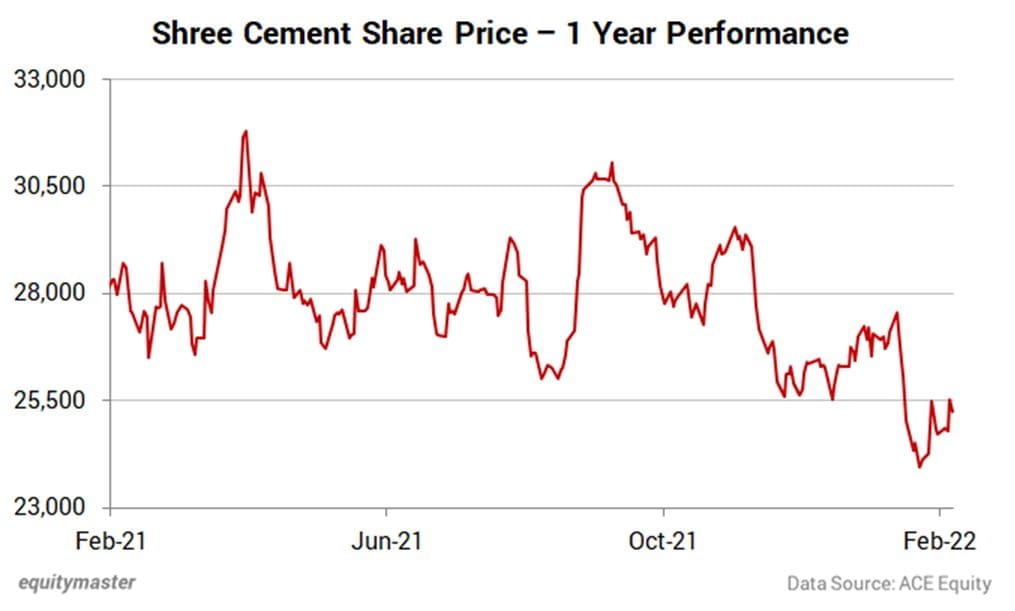 JK Cement, incorporated in the year 1994, is a mid-sized Indian cement company. The company has over 4 decades of experience in cement manufacturing.

JK Cement has an installed grey cement capacity of 10.5 MTPA making it one of the leading manufacturers in the country. It's also the second largest white cement manufacturer in India, with annual capacity of 6 LTPA.

It's an affiliate of the multi-disciplinary industrial conglomerate JK Organisation.

The company initiated a greenfield grey cement capacity expansion of 4 MTPA at Panna, Madhya Pradesh, with a split grinding unit at Hamirpur, UP. The total outlay for the project is pegged at Rs 29.7 bn with Rs 2.7 bn spent in the financial year 2021. It will borrow Rs 1.7 bn for the project which is expected to be completed by the financial year 2024.

The company derived 95% of its revenue from Indian operations during the fiscal 2021.

Its earnings before interest, taxes, depreciation, and amortisation (EBITDA) declined during the quarter due to increase in input prices.

Raw material plus power and fuel costs increased 15.8% YoY due to increase in pet coke and imported coal prices, while freight costs grew 5% YoY due to higher diesel prices.

However, the company has delivered good profit growth of 35% CAGR over the last 3 years.

It has also been maintaining a healthy dividend payout of 18.9%. 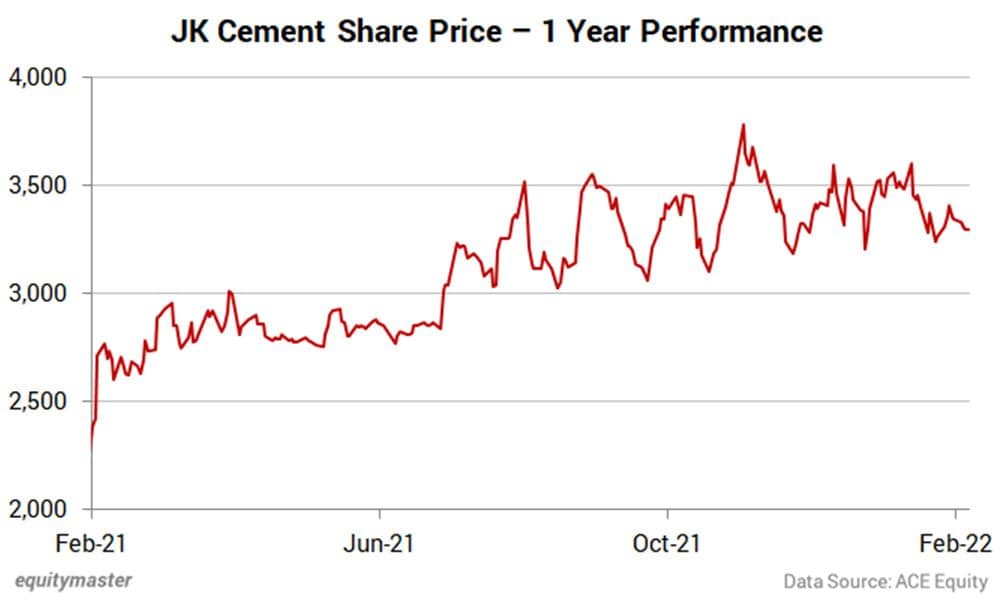 Here's a quick overview of these companies based on some crucial financials.

Please note these parameters can be changed according to your selection criteria.

We reached out to Tanushree Banerjee, Co-head of Research at Equitymaster for her view on cement companies. Here's what she had to say...

Although cement companies have been a big beneficiary of the sharp recovery in realty sector, cost pressures have kept their margins tepid for a while.

With cost pressures easing off, the cement companies could see some margin upside in next few quarters.

Plus, cement companies in India remain strong beneficiaries of the megatrends in infrastructure and corporate capex.

Despite being the second-largest cement producer in the world, India's cement consumption stands at 235 kg per capita.

This number is lower than the global average of over 500 kg per capita. So there is still a lot of scope for growth going ahead.

The cement industry has undergone massive capacity expansion in the past decade while demand for cement remains dormant.

Historically, the ratio of cement demand growth to GDP growth has been around 1.2x. But due to a slowdown in infrastructure projects, the ratio has been much lower than the past average.

Despite this supply overhang, the margins have not fallen significantly. This is due to the consolidation in the industry. The top 5 players control nearly 50% of the market. At a regional level, this number is significantly higher.

The top 5 players according to the current market cap are Shree Cement, Ultratech Cement, HIL, JK Cement, and ACC.

However, with the increase in small & mid-sized cement players, the industry leaders are likely to lose their bargaining power.

Before you choose a stock to invest, take a look at each of the company's fundamentals and valuations. They help in deciding which company is better for investment.