A $7.1 billion rail corridor in Rajasthan that's set to cut freight times between Delhi and Mumbai to 14 hours from 14 days is now moving ahead. 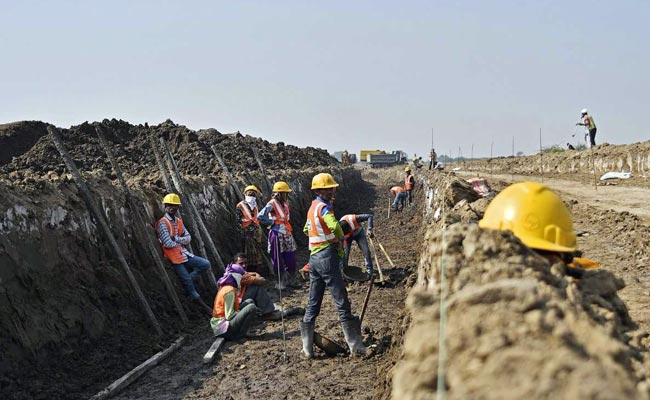 A $7.1 billion rail corridor in Rajasthan that's set to cut freight times between Delhi and Mumbai to 14 hours from 14 days is finally showing signs of progress.

About 800 kilometers away in Gujarat, a 920-square-kilometer industrial area is taking shape near the village of Dholera, with hundreds of workers fusing concrete sections of a sewerage system on a recent visit. Summing up the massive project's ambition, a sign for a yet-to-be-built housing development reads: "Dream City." (Summing up the massive project's ambition, a sign for a yet-to-be-built housing development reads: "Dream City.") Photo: Bloomberg
Plagued by delays, red tape and disputes over land acquisition, for years it seemed the $100 billion Delhi-Mumbai Industrial Corridor would remain just that - a dream. First proposed more than a decade ago, the sprawling assortment of smart cities and industrial parks on both sides of the freight railway could cut logistics charges that amount to roughly 14 percent of total costs by bypassing the country's infamously chaotic major cities.
"It's not merely a pie-in-the-sky project," said Michael Kugelman, senior associate for South Asia at the Woodrow Wilson Center in Washington. "It's a very real initiative that's gotten off the ground. If it can get over some significant humps, it could make some very real progress."

Japan, seeking to boost ties with India as a counterweight to China, is partly financing the DMIC project and holds a 26 percent stake. Indeed, Japan's Tokyo-Osaka industrial corridor is an inspiration. NEC Corp. has invested in a joint-venture project with the Indian government that is already providing logistics support along the route.

"In the last couple of years, we've seen that the pace of construction has quickened considerably," said Piyush Sinha, who heads the joint venture as NEC's India director.

For others, initial pledges remain contingent on the project's progress.  Airbus SE signed an agreement to assist in planning an "aerospace and defense manufacturing cluster" in Dholera, but pending an order of military helicopters from the Indian government, the French aviation giant hasn't made any firm plans to invest there yet.

"We are in touch with several states to identify the right location for setting up the final assembly line and certainly we are looking at Dholera," said Ashish Saraf, a vice-president at Airbus India, in an email.

Workers in Dholera are laying infrastructure over a 22.5 square kilometer area in plots that are mostly owned by the government. Officials say this will be completed by the end of 2019, and they can then sell plots to factories. In three decades, they envision a city larger than Berlin.

The goal is to set up a "plug and play" environment for investors, says Jai Prakash Shivahare, managing director of the Dholera Industrial City Development. "We are looking to tie up with anchor investors so that they can also start their construction and in one-and-half-years, when our site is ready, their factories can also be ready."

Work has now begun in four of the eight manufacturing destinations proposed in the first phase of the industrial corridor. But it has been far from smooth sailing to get to this point as red tape and budget constraints across six states and numerous sprawling ministries slowed progress, causing some to walk away altogether.

Development beyond the initial 22.5 square kilometer area in Dholera remains uncertain as farmers opposing land sales have a case pending in the Gujarat High Court demanding the government scrap its plans. "The future of Dholera is dark," said Sagar Rabari, a farmer activist in Gujarat.

In Rajasthan, where roughly 40 percent of the freight line passes, the state still hasn't taken possession of land five years after the process began, even as bureaucrats seek to woo investors by publicizing two proposed industrial townships. Unlike Dholera, farmers in the Khushkhera-Bhiwadi-Neemrana area do want to surrender their plots, but can't as the state government doesn't have enough money to pay for the 14 square kilometers of land.

Villagers, meantime, aren't allowed to sell to anyone else. "Farmers are the losers," says Sube Singh Yadav, 64, a villager in Sahajahanpur.

Rajasthan authorities say they are arranging Rs 3,200 crore for the land acquisition.

"We will be proceeding with the land acquisition with innovative ways of financing," says Rajeeva Swarup, additional chief secretary for Rajasthan's industry department.

Most of the land needed for the freight corridor has been acquired, funding has been completed, contracts have been awarded and a phased start from December 2019 is expected, the Dedicated Freight Corridor Corporation of India Ltd. said in a statement. The whole corridor will be completed a year later, it said.

Promoted
Listen to the latest songs, only on JioSaavn.com
Much like Moody's Investors Service - which last month raised India's sovereign rating for the first time since 2004 citing potential dividends from reforms - some analysts are looking through the haze of short-term uncertainties to bet on the project's prospects. But even with progress picking up, few expect anything but a bumpy road ahead.

"It's a national flagship project, yes, but despite a fair amount of coordination from the center the fact remains that the project just has so many moving parts," said Jan Zalewski, a Singapore-based Asia analyst at Verisk Maplecroft, a political risk firm. "The DMIC in its entirety will continue to move ahead at a snail's pace."