Blocked stormwater drains, large-scale construction activity in places where lakes used to flow and unusually heavy rainfall have all contributed to the waterlogging

At some places, it took an hour of rain to flood the area, say residents.

After it rained through the night in Bengaluru, people woke up to inundated streets, uprooted trees and water entering homes and basements in several areas. Residents say that there was two-feet-high water on the road outside Souparnika Residency, just off Bannerghatta Road, in the morning. While the water level went down in a few hours, the basement of the apartment remained flooded. However, this wasn't the first such occurrence for the complex.

Abhinav, a student and resident of the complex, told NDTV, "This happened last year as well. In fact it happens twice every year. The roads get flooded and enter our homes. Cars and motorcycles also get submerged. It translates into huge losses for vehicle owners."

His neighbour Chandrashekar said, "It has been happening for the last four years. It is because the stormwater drains are blocked. We spoke to the authorities about it last year. But nothing was done. It doesn't matter which party is in power, nobody cares. They are all the same."

The fire services staff was seen pumping out the water here. TR Puttanaiah, Regional Fire Officer, told NDTV, "The pumping will take a few hours. This has happened because it is a low-lying area."

Some kilometres away, in Kothanur Dinne, the residents of Thirumala Anemone have spoken to the builders of their apartment which is still under construction. They also feel blocked stormwater drains are responsible for the flooding.

Arvind, a resident, said, "This is the pathetic state of Bengaluru city, the state capital. It is because the drains haven't been cleared. It all boils down to the drainage system which is in a bad shape."

It took an hour of rain to flood the area, say others.

Chaitanya, another resident, said, "This time it happened at the closing of the season unlike last year when the area was flooded during monsoon. A neighbour who left home for some work at 2.30 am returned to find the area flooded an hour later." 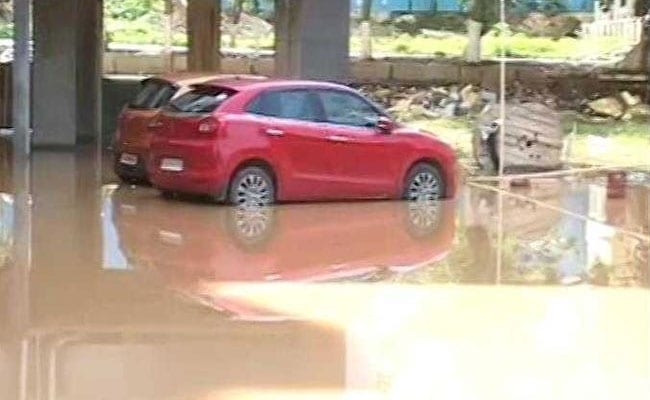 At Nirmal Plaza, only the tops of cars were visible in the basement. Two-wheelers were completely submerged in the water.

"We have been receiving distress calls from people in the southern suburbs of the city reporting flooding of roads and the basements of their apartment buildings," an official from the city's civic authority said.

Blocked stormwater drains, large-scale construction activity in places where lakes used to flow and unusually heavy rainfall have all contributed to the waterlogging.

"Bengaluru got an average of 4 cm rains due to the southwest monsoon, which is still active over the state," India Meteorological Department's (IMD) Bengaluru Director CS Patil said.

The rains are expected to continue over the next five days, the official said.